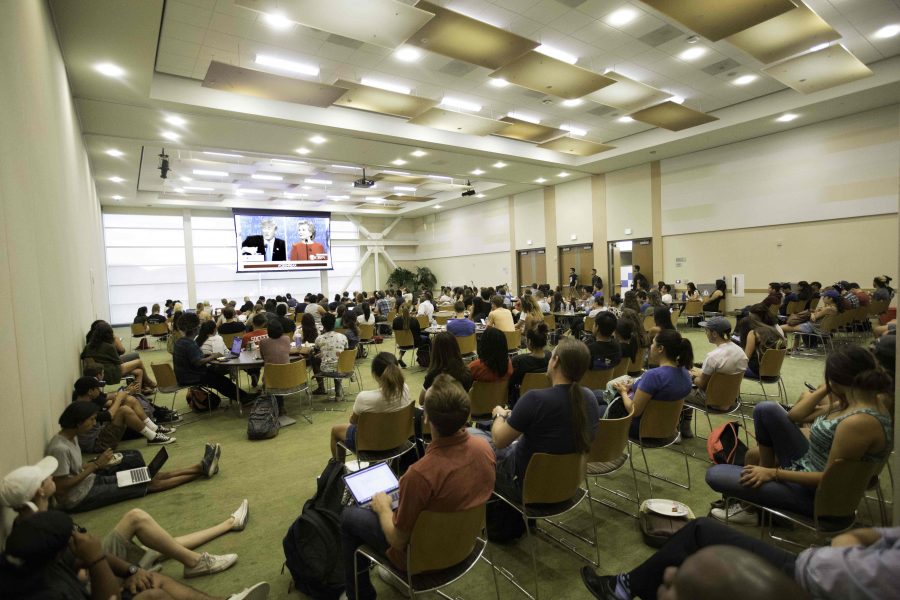 CSUSM students packed the USU Ballroom on Sept. 26 to watch the first U.S. presidential debate of the year and to discuss important political issues.

“It’s really refreshing and surprising to see people my age especially [people] younger than me to be interested in politics,” said third-year Brandy Williams.

The event was hosted by ASI and the Political Science Club.

“I hope [students] engage more in the political process and get more information on the elections,” said ASI Vice President of Student & University Affairs, Chris Morales.

The event started at 4 p.m. where the floor was open for students to discuss political issues prior to the presidential debate. The rest of the students started to pack the Ballroom around 6 p.m. when the presidential candidates, Hillary Clinton and Donald Trump, took their stands to debate on national issues.

“All Americans should watch this debate and should be involved,” said senior Marlene Schjoelburg.

The goal of this event is for students to learn more about the presidential candidates and vote.

“Everyone who can vote [should vote],” said senior Elise Yorgensen.

Students expressed their political opinions and thoughts after the debate, bringing up critiques about the style of the debate, the issues and candidates.

Participants raised their hands and made criticisms about each candidate’s lack of professionalism and the lack of issues about college students.

“If people are angry about the politics here then [they] should be more engaged to try to change it,” said fourth-year, Vilde Nyseth.