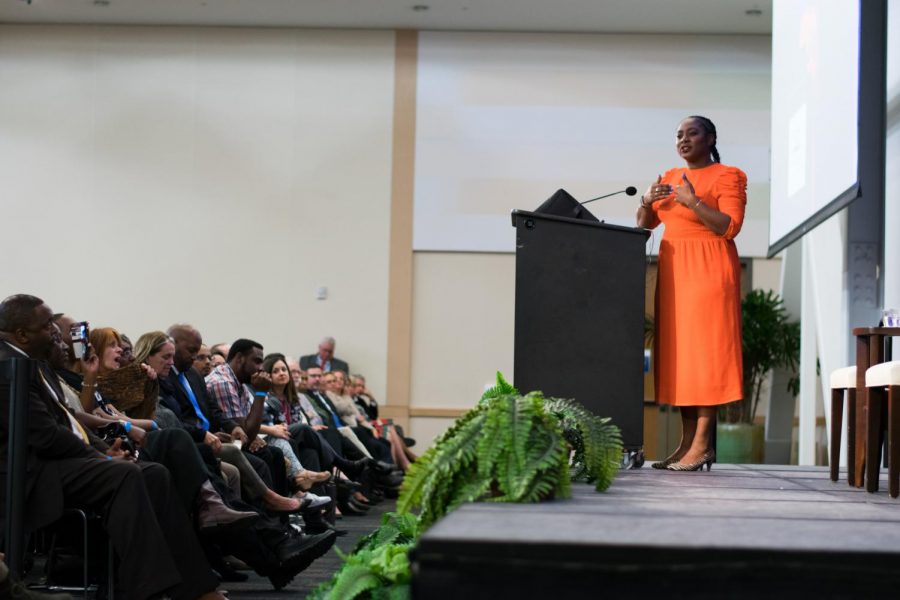 Co-founder of the Black Lives Matter movement, Alicia Garza of Oakland, California, came to CSUSM to share how she turned a hashtag into a social justice movement.

In the USU Ballroom on Nov. 29, Garza spoke to around 1,000 people about how she felt after the not guilty verdict in the George Zimmerman trial, the post that she made on Facebook as a response to the verdict and some of the misconceptions about the Black Lives Matter movement.

As Garza took the podium, she received a warm round of applause.

She began by acknowledging and thanking the indigenous peoples of this land for their stewardship and for having her as a guest. She said, “y’all, it’s important that we continue to acknowledge how we got here. We can’t talk about black lives mattering without talking about what this country has done to indigenous people.”

She explained that Black Lives Matter was established in 2013, and now has 40 chapters in four countries.

The movement’s roots began with the fatal shooting of 17-year-old Trayvon Martin in 2012. “Many of us didn’t hear the story of Trayvon Martin because the prosecutor, Angela Corey, refused initially to press charges,” she said. “We didn’t hear about Trayvon being murdered until groups like the Dream Defenders and the Black Youth Project 100 and Trayvon’s own family began to protest.”

Garza spoke about the language used to describe the event.

“When we talk about what happened to him we use euphemisms. He was shot. That’s true, but why was he shot, under what circumstances? When we talk about the trial, people say ‘the Trayvon Martin trial,’ you cannot put a dead person on trial,” she said.

She explained how leaked photos changed the narrative and made Trayvon look like a thug who deserved to be shot. She said these weren’t “… the photos of them at space camp, not the photos of them with their family, but photos of Trayvon with money doing things that 17-year-olds do, which is pose.”

Garza sarcastically referred to a stereotype about black people explaining why Zimmerman was afraid of a child and chose to kill him. “Because, of course, us black people we have superhuman strength, you can’t see it right now, but try it, you know what I mean?”

The audience laughed awkwardly, and she used the laughter to remind us that those stereotypes have an affect on our society.

When she said she heard of Zimmerman’s acquittal, “I thought to myself, that could’ve been my brother. My brother wears hoodies, my brother walks at night, my brother lives in a community where there aren’t a lot of people who look like him, so he might be seen as threatening even though he’s never been in a fight.”

Garza said, “I [posted on] Facebook and I wrote a love letter to black people, because I was tired of seeing the same old narratives over and over again for things we didn’t create… It doesn’t matter if you vote, you can still get killed. It doesn’t matter if your pants are around your waist or down at your ankles… you can still get killed… we matter, our lives matter.” The hashtag provided by her friend Patrisse Cullors, allowed others to join in on the conversation. Garza said, “it created an opportunity for people to be a part of a conversation that was bigger than us…We believe that we could build political space for folks to start to understand to get woke. Why is this happening?… it’s actually a way in which our society is constructed… if we want to live in a time where race doesn’t matter, then you have to dismantle systems.”

Garza addressed a few myths of the movement. The first was the question, don’t all lives matter? She said, “in practice, it’s not true that all lives matter… that’s what I fight for everyday…We are not fighting for a world where black people are on top. We’re fighting for a world where we change the way power operates in the first place, so that we all have power together. Black Lives Matter fights for all black people, not just for black men. Black is about cisgender people, transgender people, folks who don’t conform to gender at all.”

Garza spoke on the issue of solidarity, saying that minority groups need to learn how they have been pitted against one another. She spoke about the need for white people to get involved in the movement too. She said, “our task in this moment is not to split ourselves into smaller and smaller categories and then do oppression olympics… what we can do is learn each other’s histories and how we got here… white people need to be down, for real, this system was set up for you. So, if you’re not a part of this movement, we’re in trouble… if it’s just my movement we’re not going to get anywhere.”

Garza concluded her talk with where she thinks the movement should go from here. “It is a moment where all of the paradigms that we’ve been operating under, left, right, Republican, Democrat, these things have no meaning or salience anymore… we get to shape what happens right now… we get to challenge ourselves to build something better and to do it quick.”

Brittany Jackson, a third year Political Science major said she felt inspired to live out her values to get to her vision of what the community should look like. She said she would like to see more people at the The Black Student Center’s open discussion forum called Real Talk Thursdays every Thursday at u-hour in USU 4200.