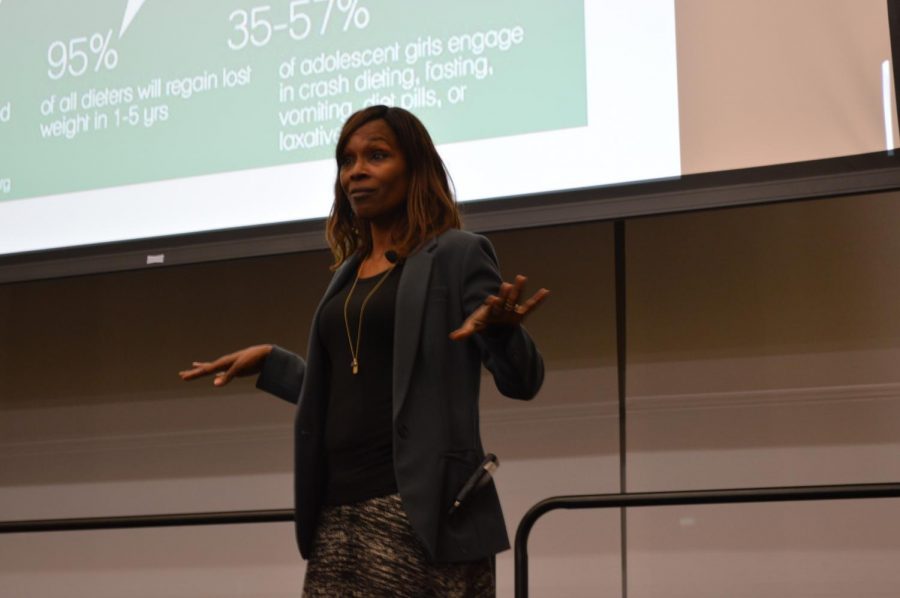 Armstrong, author of Not All Black Girls Know How to Eat, is a screenwriter and an advocate for the National Eating Disorder Association. Armstrong’s book is the first book centered around eating disorders amongst African-American women. Her focus was to discuss topics of minorities with eating disorders, childhood trauma and how poverty contributed to her own battle with an eating disorder.

Raised in Brooklyn, NY, Armstrong grew up in poverty with her single mother and two older sisters. She said she suffered of hunger due to her family’s lack of resources for food. Armstrong said her early years were rough, but became worse when she was raped at 12 years old, by a relative.

Armstrong said her eating disorder began after the incident. She said she believed she was “of no real value in the world.” Her situation growing up in poverty and keeping the secret of her rape  made her feel like she had “no control of [her] life.”

At the event, students were asked to fill out Kaiser Permanente’s Adverse Childhood Experience questionnaire to determine their childhood trauma scores. Questions about household situations and the mental state of family members were asked on the questionnaire. Students didn’t have to fill it out, but could count their scores in their head. Those with more than four points would be considered severe.

Armstrong said she suffered from “anorexia, all three bulimias [and was] orthorexic.” Anorexia is one eating disorder where a person refuses to eat or consumes below the sustainable amount. The three forms of bulimia she had were the binge and purge, exercise and laxative use. Orthorexia is the eating disorder of becoming obsessed to an unhealthy extent to only consuming healthy foods. She said her series of eating disorders became severe. Eventually, she went through the difficult process of recovery. Today, Armstrong is 14 years recovered.

She told her story vividly, and brought up how minorities are “very closeted in our community” and not thought of in connection eating disorders. In her speech, Armstrong also spoke of how “60 percent of those with bulimia have experienced sexual abuse.”

She also discussed how childhood trauma can contribute to the development of an eating disorder. For students who have food insecurity, the Cougar Pantry is located in the USU 3100 next to the LGBTQA Pride center. She reminded students that “an eating disorder is a mental health issue. If you need help, say I need help.”

Armstrong said to be kind and nice to others, as “we are all getting through this thing called life together.”