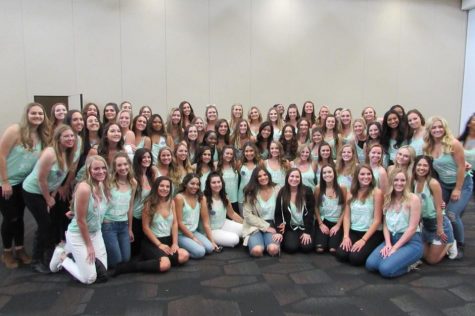 Every year, the sorority Alpha Xi Delta contributes to the San Diego organization Autism Speaks. Last year they raised $33,000 where 100 percent of the proceeds went to Autism Speaks.

“Since we started the AmaXIng challenge event, we have raised [more than] $160,000, which is the highest cumulative amount raised for philanthropy in greek life at CSUSM,” said Philanthropy Vice President of Alpha Xi Delta, Caroline Cherry.

“…Every year we host a color run in the fall, last year was the first year and we’re hoping to make it an annual event, in the future,” said Cherry.

“light it up blue,” with a banner to spread awareness of what they do, and why.

“The reason we do it, is because it costs a family an average of $60,000 a year to help support their child affected by autism, and so every dollar we help fundraise and donate can make such a big impact on their families,” said Van Blerck.

Lesley Ibarra the Vice President Finance and Operations said the sorority is unique because of the support and sisterhood bond they have.

“We support each other through everything… our sisterhood is so close and we bond very well and having this philanthropy, honestly brings us together every time, because we raise awareness for something so big, that could [help] a lot of children in this country,” said Ibarra.

According to the csusm.edu website, it said that, “Alpha Xi Delta is a recognized member of the Greek (fraternity/sorority) community on [CSUSM] campus since 1995.” They currently have 114 members.

In order to join Alpha Xi Delta, Van Blerck said freshman can register in the beginning of the spring for formal recruitment. It is a three day process in the first couple of weeks in February

“The first day is open house, second day is philanthropy where you will learn about sororities’ philanthropies and the third day is preference, you go to two sororities and then it’s a mutual selection,” said Van Blerck.

Cherry said that it is empowering to connect with families affected by Autism.

“It’s really easy to say that we raise all this money every year and it’s fun to write the number down and say how much we raised, but… I think that it is so impactful to see the actual families that we are helping,” she said.