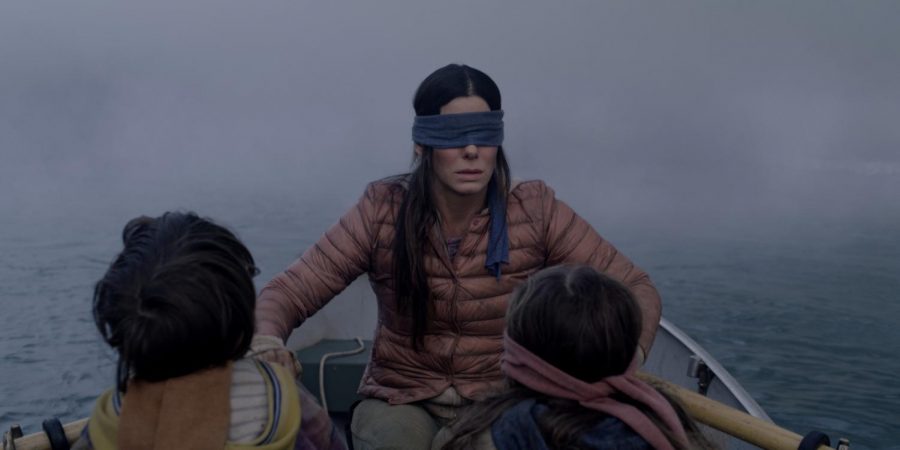 The movie portrays relationships and the battle Malorie Hayes (Bullock) went through in order to survive the eerie unidentified force causing the death of anyone who looks at it.

The characters are strongly encouraged to cover their eyes with blindfolds whenever they are outside or are in a situation where they may see the force because even screens can’t save you from the lethal trance it causes.

Throughout the movie, the timeline hops back and forth from the past and present for the viewers to understand Malorie as a person and how it currently affects her journey.

Flashbacks show Malorie pregnant when the force wreaks havoc on her town, killing most of its occupants including her sister. After being saved by a man named Tom (played by Trevante Rhodes) she is guided into a house full of strangers that soon become her allies.

The present shows Malorie with two young children, a boy named Boy (played by Julian Edwards) and a girl named Girl (played by Vivien Lyra Blair), taking on a dangerous path on a river in hopes of finding a safe compound they were told of over radio.

In flashback, the audience is shown how Malerie obtains the canary birds that inspired the title of the movie.

During a less than conventional trip to the grocery store, Malorie and a group of the other survivors from the house discover the two birds in a cage and Malorie is fascinated by how they are still alive. After an encounter with an “immune” person, she realizes the birds knew the person was a threat before anyone else (signaled by an incessant chirping), making the birds a crucial potential tool in surviving.

The group discovers that there are people who are “immune” to the force and are brainwashed into tricking or forcing others into looking at the force to admire its “beauty.” This of course results in the death of the person who is forced to see it.

Throughout the movie, Malorie crosses paths with the brainwashers, who encourage her to open her eyes and attempt to expose her and the children to the force. A feat proved challenging to overcome especially since the force has the power to take on the voice of someone familiar, making it harder to deny.

The film makes for a stressful watch that ends on a cliché note. Overall, Bird Box is a must-see for those wanting to finally understand the memes and hype on social media.