President Haynes congratulated for her service on campus 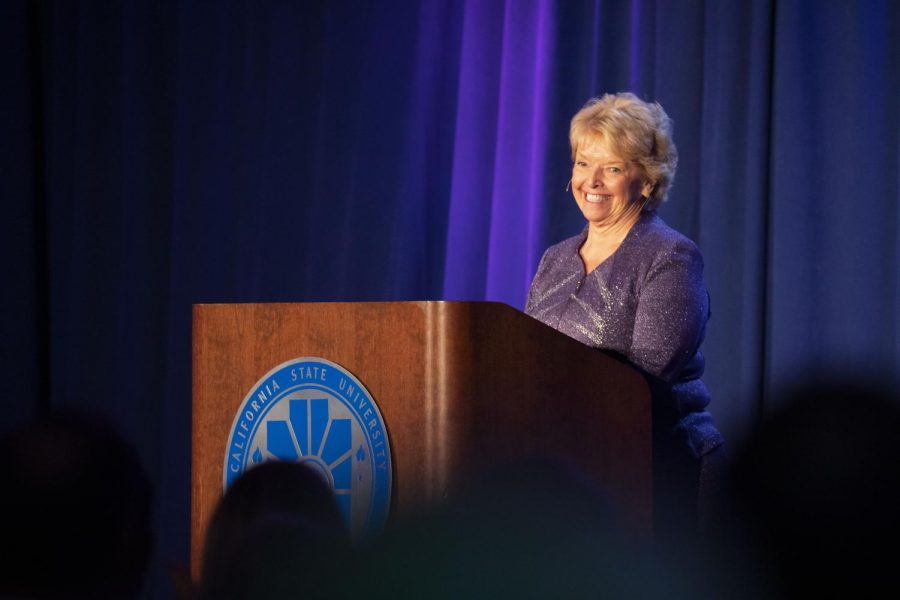 President Haynes addresses the crowd during her final report to the community on Feb.7.

More than 600 guests of the San Diego community gathered to celebrate President Karen Haynes’ 15 and a half years of dedication to CSUSM as she prepares to retire this June.

This was the 15th annual Report to the Community hosted by the CSUSM counsel on Feb. 7 from 7 a.m. to 9 a.m.

This year was different because it addressed the foundings of CSUSM and was a farewell to President Haynes.

The event focused on the impact of having 45,000 members of CSUSM alumni involved in the San Diego region.

President Haynes pushed to set the Forward Together Campaign to $50 million and because of generous donors and sponsors, the campaign exceeded their goal and hit $55,035,210.

The Forward Together Campaign launched publicly in 2015 and was the largest philanthropic campaign in San Diego history.

When President Haynes was first nominated for the presidency, she postponed her response to the invitation. First, she examined the demographics of the university and wanted to see if there was room to grow.

Under President Haynes leadership starting in 2004, CSUSM grew from seven buildings to 22 and from 7,000 students to 17,000 and more than 100 new academic programs were created.

President Haynes was the driving force behind the creation of a new Extended Learning building under construction currently, but scheduled to open in fall 2019.

Other accomplishments completed under President Haynes reign were a new engineering program and the university having the highest per capita number of veterans and foster youth in the CSU system.

CSUSM adjusted their priorities when it became evident  there was an impending degree shortage and one third of existing regional jobs require a degree or credentials at the entry level.

A video was presented about President Haynes interaction on the campus and Haynes said, “I think a smart leader knows when it’s time to step away.”

After the video, Cafferty, Jack Raymond, businessman and philanthropist, and Prado-Olmos, stepped up to the stage to commemorate President Haynes.

Cafferty praised President Hayne’s composed dignity throughout her leadership, “thanks to President Haynes’ crystal clear vision- is entwined in the aspirations and progress of our region.”

After the work President Haynes contributed, CSUSM is ranked 23rd in the nation for Best for Vets, “52nd out of nearly 1,400 universities’ in the CollegeNET Social Mobility Index”  and 45th, “Best Bang For their Buck.”

At the end of President Haynes speech, she said, “We are clear that together with all of you we have achieved these goals, these accolades, these partnerships, and that will not end with our retirements.”