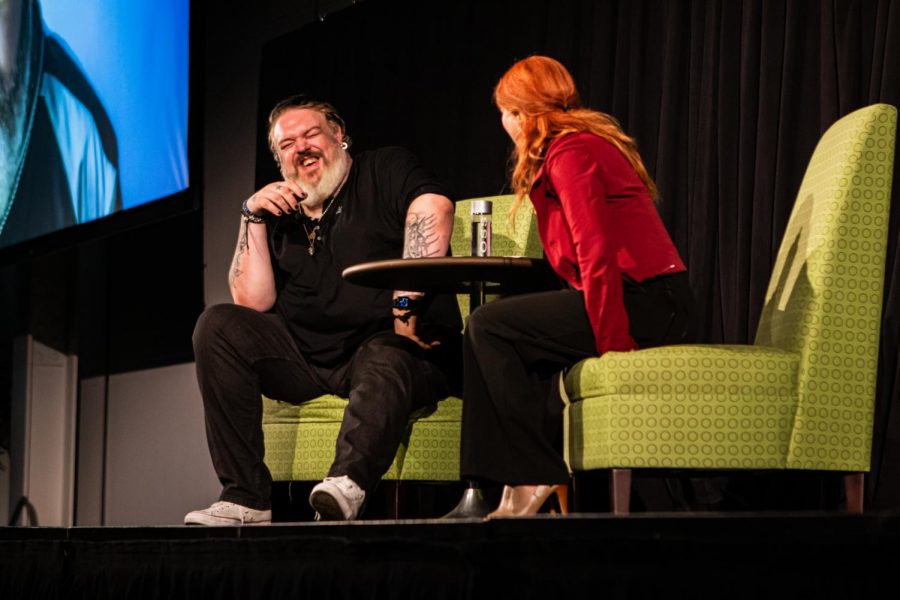 The fantasy of the hit television show Game of Thrones, which ended earlier this year, was brought to CSUSM when Kristian Nairn, who portrayed Hodor on the series, visited campus on Oct. 15.

Nairn, who visited as part of the Arts & Lectures series, spoke to a crowd of about 200 people in the USU Ballroom. Literature and Writing professor Heidi Breuer interviewed Nairn on his career as a DJ and an actor.

Before he became known for his role in Game of Thrones, Nairn worked primarily as a DJ, a career which he said he stumbled upon by accident. He has now been DJing for 20 years.

“I knew I wanted to perform, to do music, I got a dual degree in acting and music…I was quite a shy person, it was a real way to connect with a large group of people… I did not do debates, didn’t do drama, I thought it was stupid,” Nairn said. “I always say that introverts always make the best extraverts if you get them on stage. I had to find a way to channel that.”

One of the questions Breuer asked was about how it was playing a character who does not speak.

“With Hodor, it’s all about your face and your body language; words don’t really matter.

I’ve always been very sultry, still am. I like my own space. When I’m on stage, I love being there but as soon as I get off stage, I love [my space], so it wasn’t that hard,” said Nairn. “Only in Game of Thrones will you have a character who is not able to speak that carries the entire fate of the kingdom.”

Breuer then spoke about the impact that the character had on autistic and disabled communities and asked how this may have shaped Nairn’s portrayal of the character.

Nairn said he did not really study autism as preparation for the role but that there were so many examples of the impact of his performance. “A mother came up to me and said, ‘I can’t watch Hodor because it makes me cry, in a good way.’ She said it made her think of her own child and how he is perceiving the world. Another time, [I was] in Chicago and there was this little kid who never spoke and the only time he would ever speak was when I said ‘Hodor’ on screen… After that, I cried for about a half an hour. Ultimately, I wanted to treat it very respectfully.”

Near the end of the event, students were given the opportunity to ask Nairn questions. One student asked what Game of Thrones house he would be in, to which he answered the House Arryn.

Another student asked what the best part of being Hodor was.

“The best thing about being Hodor was that it changed my life, nothing’s the same, from top to toe. The people I got to meet, to be able to learn from experienced British actors was a really intense masterclass,” Nairn said.