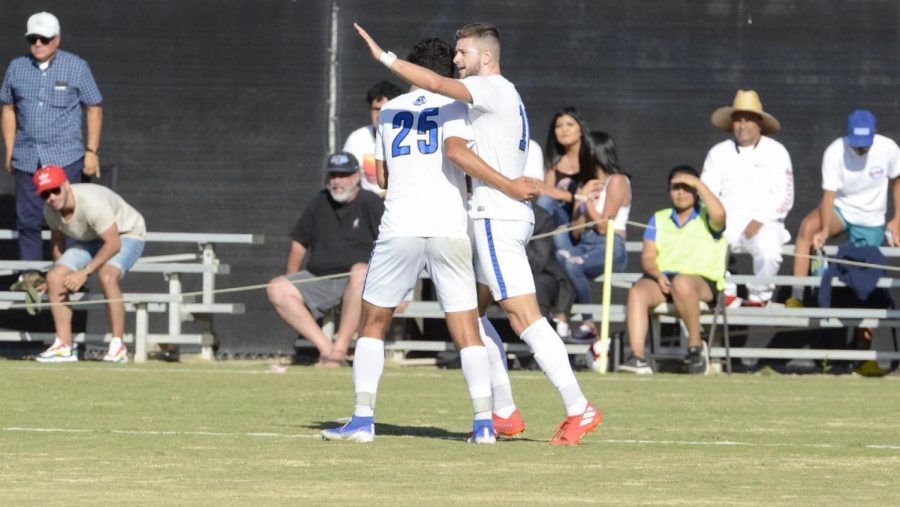 CSUSM men’s soccer team prevailed against the Stanislaus State University’s Warriors with a 3-1 victory this past Friday ,Oct. 18. This was the Cougars second consecutive win in the California Collegiate Athletic Association(CCAA).

The Cougars started off quick, with sophomore, Raul Meza, scoring a goal in the lower left corner of the net, in the 22nd minute of the match, putting the Cougars in the lead. Meza would end the match with two shots total, and one goal.

Shortly after, sophomore Juan Camillo Salazar  scored a rare bicycle kick off the keeper’s rebound in the 33rd minute to bring the Cougars lead 2-0. This was  an impressive shot, since not many can achieve a bicycle kick during a game. This wouldn’t be Salazar’s only goal of the match.

Within the last two minutes of the first half, Salazar earned his second goal of the match, putting the Cougars up by three in the first half. The goal was shot to the lower left corner off of a pass from senior Fabian Jacobo on the far side. This was  Salazar’s second consecutive two-goal game this season. Salazar now leads the Cougars with eleven points and five goals for the season.

The second half would be a slow one for the Cougars however the Warriors would manage to score a goal in the 89th minute by the Warrior’s Dayne Sturtevant.

“I felt really good about today. I thought we were in total control of the game from the opening whistle to the ending whistle.” Head coach, Ron Pulvers said on a recap video on CSUSM men’s soccer official Twitter page.

The Cougars would go on to lose their next match against Chico State 2-1 Sunday, Oct. 20 with their record now standing at 5-7-2.