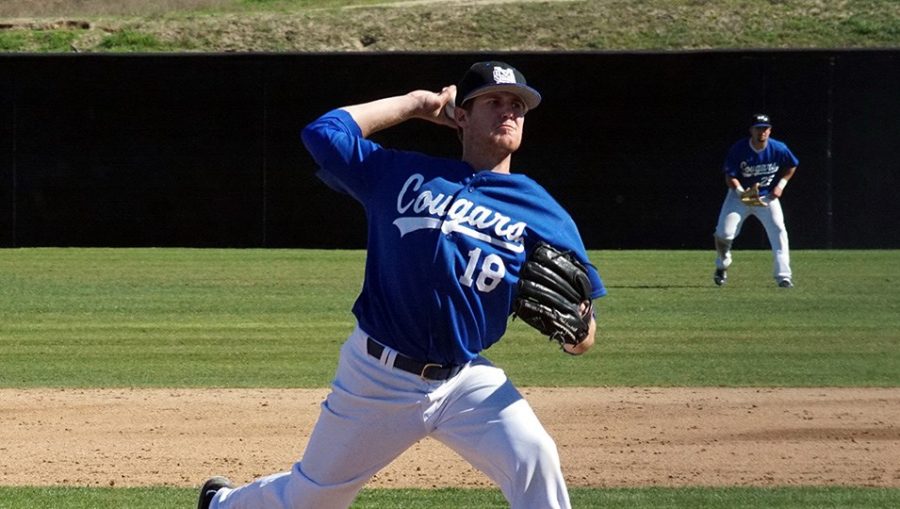 Taylor Ahearn pitches a game for CSUSM in 2017.

Taylor Ahearn spent two years at Cal State San Marcos playing college baseball with the Cougars in 2016 and 2017. Next on Ahearn’s agenda was getting drafted by the Boston Red Sox.

Ahearn is from Santee, CA and played baseball at Saint Augustine High School in San Diego. He graduated from Saint Augustine in 2013 and decided to begin his college ball experience in New York playing for Siena College.

Ahearn spent his first two years playing for the Siena Saints but things didn’t quite go as planned. “CSUSM recruited me the most when I was in high school. I wanted to try division one baseball … but wasn’t enjoying the game. So I tried to get with San Marcos again and they welcomed me with open arms in 2016 and I’m thankful for the decision” said Ahearn.

In his final season at CSUSM, Ahearn heard his name called in the 32nd round of the 2017 MLB draft.

Selected by none other than the Boston Red Sox, he couldn’t have been happier. He said, “It was the best day of my life because someone took a chance on me after all of my hard work”

Following his 2017 graduation from CSUSM, Ahearn made his way to Florida to play in the Rookie division of MiLB in 2018. “Playing in the humid temperatures in empty stadiums wasn’t the most enjoyable thing in the world, but just having the opportunity to play professional baseball was all that ma tered to me,” said Ahearn.

That offseason, Ahearn was cut after going through some struggles mentally but that didn’t discourage him. “It was a great experience and I learned a lot about what I needed to improve,” he said.

Ahearn worked hard to improve his weaknesses and build upon his strengths and by 2019, found himself on the roster of an independent professional baseball team. Ahearn said, “My confidence was the best it’s ever been and I had a good season.”- Looking ahead, Ahearn has signed with the Milwaukee Milkmen for the 2020 season.

When asked what his biggest step to becoming a better baseball player was, Ahearn shared, “Definitely my mental game. I’ve always been good enough, but my confi dence and belief in my abilities wasn’t always there. So, I had to work on that the most. That, along with continuing to train to become the best pitcher I could possibly be. Matt Guiliano, the head coach at CSUSM, played a big part in helping my mental game.”

It was always a goal of Ahearn’s to make it to the MLB. Through High School and his first two years in college, he didn’t get the looks he had hoped for from the big leagues.

He said, “I wasn’t good enough to get drafted out of high school, so my goal was to improve in college and get picked up from there,” and that he did.

It was in his two years with the Cal State San Marcos Cougars that Ahearn said his hopes to one day make it to the MLB began to mature into reality.

Ahearn plans to make it back to MLB affiliated baseball within the next couple years and “make it as high up in the ranks as possible”.

In reflecting upon his career thus far, Ahearn offered some wise words: “I’ve learned that having confidence in yourself is one of the most important attributes anyone can ever have. It promotes positivity and a self-driven attitude that allows someone to reach their full potential. I thank everyone that has gotten me to this point and has helped me with my struggles by making me a more confident player and well rounded person in general. Thank you coaches, and thank you to my family for your continuous support. The dream isn’t over.”