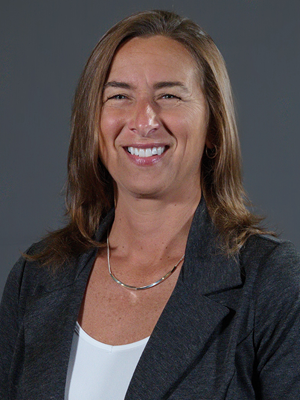 Andrea Leonard is a senior woman administrator and the head volleyball coach for CSUSM.

Q: What is your history with volleyball?

A: All the way since junior high and high school. I’ve coached college volleyball for almost 20 years now and I started off from Michigan, and most of my experience from the division one level was at the University of New Hampshire and Boston College for years, San Diego State and now here at Cal State San Marcos when we started the program.

Q: What made you want to become a volleyball coach?

A: I had some great mentors, who were really great coaches, and I didn’t know they were great coaches at the time, I just saw their passion, how involved they were and just how many doors volleyball opened for all of us younger kids. I wanted the opportunity to do that beyond college.

Q: How has this season been so far?

A: It has been really exciting. I think it is our best season yet, here at Cal State San Marcos. We have a tremendous senior class. They really spear head our goals that we set and where we want to go, and our theme in our program is leave the program better than you found it, and they are on a mission to make that happen. We have had an upward trajectory ever since we started the season. We started off with some really lofty goals and for the first time, we always host the Cougar Classic, I was really gutsy in scheduling that. We scheduled 5 matches in 3 days, and no other program really does that. I think it showed the determination, resilience, and strength of this team that we went 5-0 and won that Cougar Classic for the first time ever. We positioned ourselves really well in the conference. It’s the strongest conference in division two across the country. We’ve got the No.1 team in the country up the road for us. We positioned ourselves to make a playoff run and to go deeper than that. The best is yet to come.

Q: What are some contributing factors that play a role in the successful season?

A: It’s definitely the type of student athletes we have. We really have geared ourselves toward finding a student athlete who is committed on all fronts that academics absolutely come first. During this championship this season, they really only have time for their classes, studies and volleyball. I think that we have a lot of high character individuals. They’re very selfless. They’re great teammates and extremely coachable. I’ve had other coaches from division one pop in and say “Wow my team doesn’t look that energetic and these kids do.” So I think the contributing factors are that they’re bought in, they understand and they accept their roles, they’re very type A personality in that they take a lot of personal responsibility in their academic study and time management. They’re just good human beings, good people.

Q: Which team would you say has been the toughest opponent so far?

A: That I can say, I think is ourselves. We have played against the very best in the country across the net and we’re one of the only two teams in their schedule to take a set off of them. We’ve played against teams that are struggling and quite honestly when I say our toughest opponent is ourselves is our motto is we want to try to be better than our previous best self. So every time we step on the court is how can we be better than our previous best self. So we’re training ourselves to have that mentality so it really doesn’t matter who’s on the other side of the net from us. We are trying to compete against our previous best self and if we continue to do that, we can really monitor and gage what we need to do next and then it’s up to the opponent to try to contend with that so I think that’s how I would answer that it’s definitely ourselves and our previous self.

Q: What would you say is the biggest area for improvement?

A: I would say for us to really celebrate the success that we’ve had, and celebrate every little point because the time is running out for our seniors. So I think the area of improvement we really need is to really kind of get that cutthroat mentality and really go after it. I think, as you get closer to the end of the season, that’s when you see teams peak, and they peak because of what’s in their heart. Physically everyone’s in great shape, everyone’s had the same amount of time during the season, you really see that grit and determination and that want, that desire. That’s where I think our little area of improvement can be is there, is really unleashing that kind of a masterpiece they have inside and really unveiling that and unleashing and let them run with it.

Q: Who would you say is standing out most this season?

A: It changes from time to time, it certainly does. We see flashes, moments of brilliance from different players, I would say, all of our seniors are making an incredible impact. Like I said, they know that this is it for them, and each one of them from Maddy Newcombe to Aleese Wheaton, Eliana Williams [and] Olivia Aguilar. They have such great attitudes, they’re competing every day, they’ve given us 100 percent. I would say our seniors really are standing out and really kind of taken us to where we need to go to finish this season.

Q: What are the goals you would like to reach this season, personally and as a team?

A: We’ve kind of broken down goals throughout the season. We’ve reached quite a few of them already, we have some that are still left to achieve that we’ve talked about in our locker room within our team, but definitely a goal I would like to see this team, because they deserve it and they know how to do it, is to make that conference tournament, again. We have made it every single year, that’s hard to do. It’s not easy, especially in the South Division. We’re on track to make that happen. I’d like to see us win the conference tournament and I’d like to see us make the regional tournament, the NCAA regional tournament. I think those are all attainable and within our reach. And I can’t wait for us to really make that come to fruition.

Q: How do you hope to prepare for making these goals happen?

A: I think if we stay focused on what we need to do on our side of the net, kind of tweaking little parts of our game. We have to have the roadmap, we have that. We’ve talked about it, we know what that is, we know where we want to go. It’s just kind of taking care of business on our side of the net, So I think staying in the moment, keeping them in the present moment, keeping them confident in our abilities our game plan our execution, what our scouting reports are and trusting the process. I think if we can keep doing that, that’s when we’ve had our most success and reminding them we don’t have to be perfect, just have to go for it.

A: You know we always talk about how we have the best team in the conference and we have the best school spirit. I mean the cheer and dance teams are always there, the student athletes are there, we get the Blue Crew. The school spirit that we have on campus, everybody’s talking about our last home games. The student section gets filled up. We love the support that we have here and it really stands out with any other team in our conference. So I think that’s what we always talk about, is how lucky we are to be here at Cal State San Marcos and the support that we have.