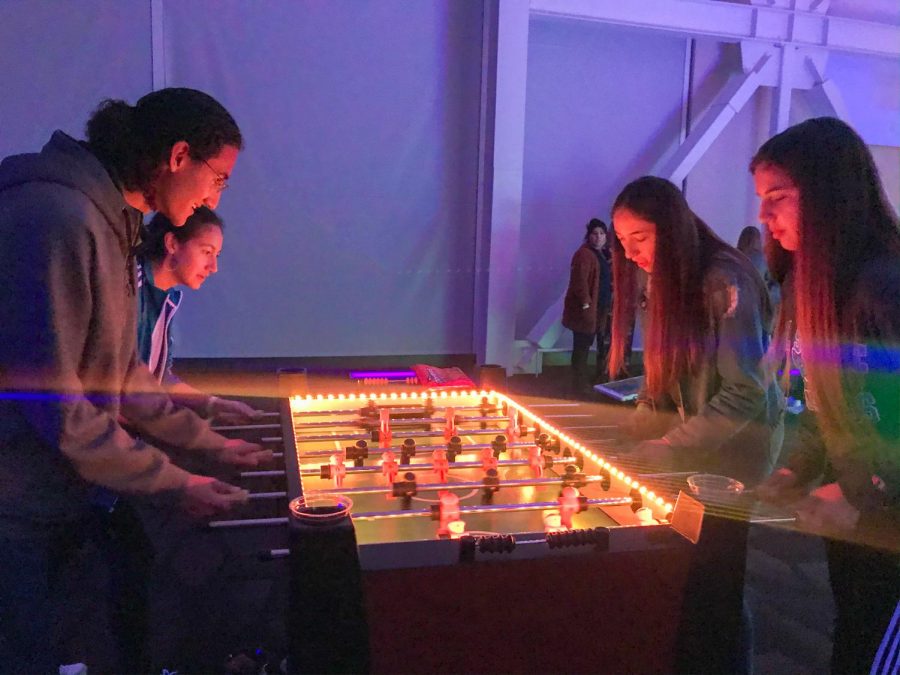 Students go head to head in a game of foosball.

As students walked through a white cloth draped tunnel, the glow of a rainbow and boom of music greeted them as they entered Tukwut Nights, a welcome back celebration for the semester.The annual celebration hosted by USU Live! is a semi-formal dance for CSUSM students over the age of 18. The dance was held in the USU Ballroom from 8 p.m. to 11 p.m on Jan. 24. While students were able to leave and reenter as long as they wore the wristband they got from check-in, they couldn’t reenter once the doors closed at 10 p.m.

The event consisted of two separate spaces, with the food hall and arcade on one side of the USU Ballroom and the dancefloor and arcade on the other. After students walked through the tunnel, the first visible area that appeared to catch student’s eyes was a food hall offering a burger bar, taco bar, ice cream bar and s’more bar. The ice cream bar was one of the more popular of the food stations, as students went through multiple tubs of ice cream.

About half of the students who attended Tukwut Nights stayed in the food and activity room, so all of the tables remained full. Right behind the food hall towards the back of the ballroom was an activity area.

In the activity area were typical party games such as foosball, air hockey, ping pong and cornhole. All of the games, as well as the white inflatable chairs in the room were covered with LED lights, filling up the dark room with bright neon colors. Many groups of students came and left the room to play games throughout the night.

In the other ballroom was the main event – the live DJ and the dance floor. At first, no one entered the ballroom. Students appeared to not want to dance on the dance floor while it was empty. However, by 9:30 p.m., the ballroom was filled with students dancing to remixes of mostly popular rap and hip hop. LED lights flashed and flickered according to the rhythm of the music. Behind the DJ was a screen with digital butterflies and landscape, changing back and forth every minute or so.

Mekala Lehmunn, a senior literature and writing major, said she enjoyed last year’s event and wanted to see this year’s theme. She said her favorite part this year was “the decorations and lights on the dance floor” but “the music was too loud and the music genre was limited.” Even so, she said, “I would encourage other students to come because it’s a safe and fun way to party