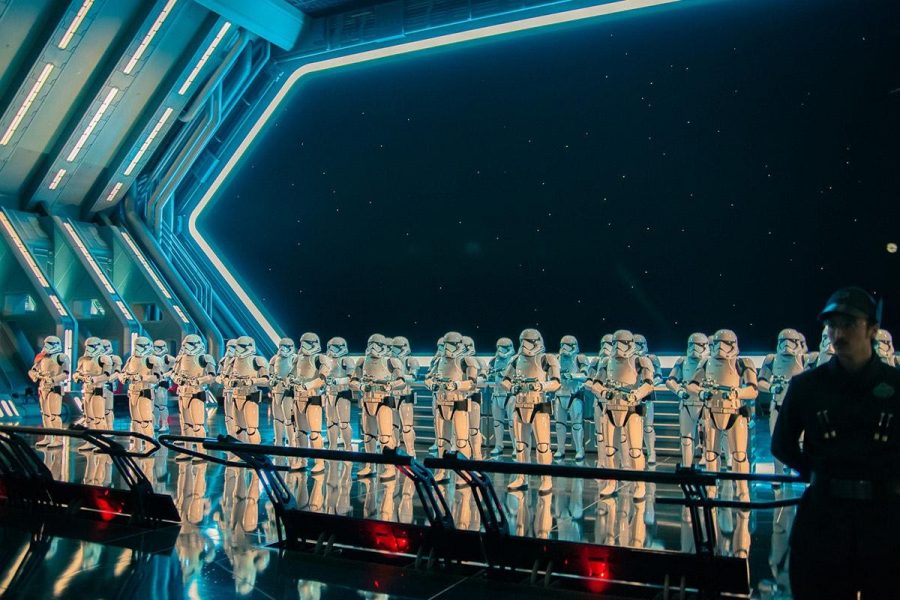 Stormtroopers guarding a First Order hangar at Disneyland’s Rise of the Resistance.

One of the long-awaited rides for Star Wars: Galaxy’s Edge opened its doors for Disneyland guests on Jan. 17.

However, things go awry when the new recruits are captured by Kylo Ren and General Hux to be interrogated for the location of the Resistance hideout. As prisoners, recruits escape and are now on the run, as Kylo Ren locks down the Imperial Ship in search of the escaped prisoners.

This ride is nothing like any other theme park has done before. Regardless of it being a sit-down, trackless, dark ride attraction, along the lines of the idea for Peter Pan’s Flight, there is still plenty of thrill throughout the entire ride.

Additionally, Rise of the Resistance’s animatronics and technology are unlike any other. Whether you’re encountering BB-8 or Kylo Ren himself, this ride is truly stunning. Stormtroopers even fire lasers which create holes and burns into the ride itself.

In addition to the main ride, there are multiple pre-shows to Rise of the Resistance to help build onto the story of the attraction. Riders begin in the Resistance’s hideout, with Disneyland cast members dressed in clothing that resembles the Resistance uniforms in the films.

Once the ship is captured, riders end up in the First Order ship and are greeted with soldiers of the Imperial Army and an army of Stormtroopers.

This ride surpasses anyone’s expectations. Each detail is well thought out and there is not a flaw in sight on Rise of the Resistance. The Walt Disney Imagineering Company took the time to carefully create this one of a kind ride.

Similar to Galaxy’s Edge as a whole, this attraction is completely immersive and raises the bar of what amusement parks are capable of.

Despite the chaos of getting a boarding pass to ride the attraction, waiting patiently and riding other rides for almost nine hours, it was completely worth it. Watching a YouTube video could not hold up to the experience of witnessing Rise of the Resistance in person.

If you’ve ever wanted to live in a Star Wars movie, Rise of the Resistance will truly grant you that experience.