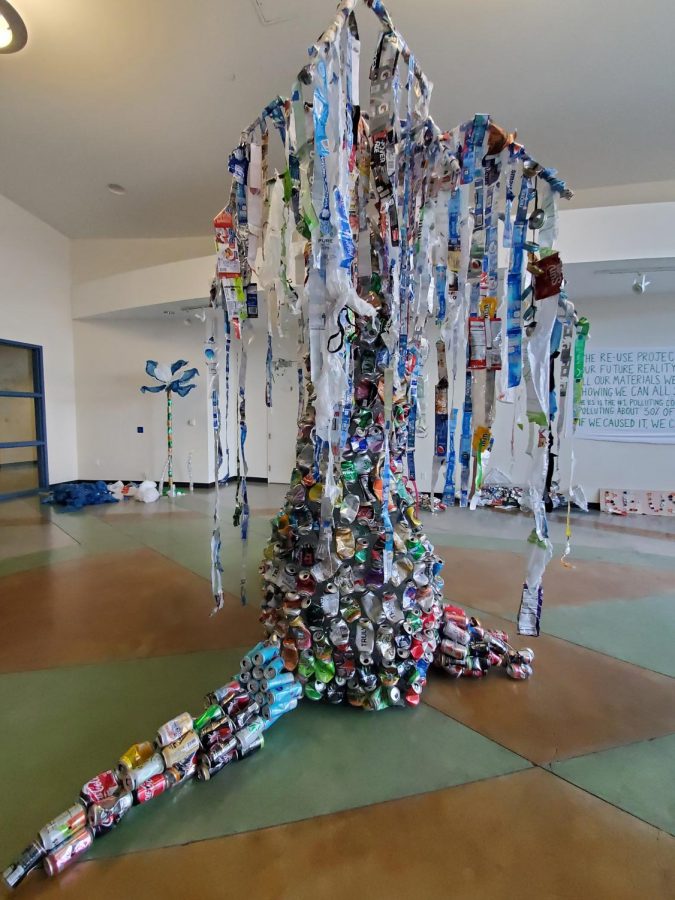 The centerpiece of the Reuse Project is a large tree.

The Reuse Project Art Exhibition began its display on Jan. 21 on the first floor of the Arts building.

Created by the student club Staircase Exhibition in partnership with the Environmental Stewards Association, the project’s goal was to raise awareness of the issue of overconsumption and single-use plastics and trash to the CSUSM community.

According to Phoenix Nitta-Hill, one of the artists, the inspiration behind the exhibit was “the natural environment, the idea of trying to preserve nature and appreciating the elements that we live in.” In addition to Nitta-Hill, other contributors to the exhibit include Addy Lyon, Shana Medel, Jennifer Funderberg, Randy Garcia, Lesley Rivera, Olivia Stevens, Daisy Camacho, Iris Lee and Chad Nicholson.

Those who participated in the Reuse Project range from computer science majors to art majors. However, one thing all the artists had in common was a love for art and “expressing oneself through artistic mediums,” said Nitta-Hill.

One of the pieces that stood out was a coyote sculpture, created by Nitta-Hill and Garcia. Nitta-Hill explained that the significance of their piece was “to capture the culture and the environment of San Marcos, given that coyotes are very prevalent around here, more so than cougars.” The artists’ choice of a coyote, rather than a cougar, reminds viewers to think about the consequences of a wasteful lifestyle and how it affects the wildlife around us.

Nitta-Hill said that the members of the club “worked a lot of hours decorating and designing these ideas to capture our environment and it took a lot of time. The tree especially, the centerpiece, took the most time. And that’s what we’re really proud of.” The tree piece is made of various pieces of trash, including plastic bags and aluminum cans.

The amount of trash found to create the different pieces of art gives a new insight into how much trash CSUSM students generate alone. Ultimately, the Reuse Project Art Exhibition calls for a sense of community and bringing students together to help protect our Earth and the environment we live in.

Nitta-Hill said that environmental stewardship is not only about the environment but “overall loving everything that we have. And I think that’s at least what our president Addy was telling me is: trying to get together as a community, think about our environment, treat everyone and the things around us that are alive, nicely.”

The Reuse Project Art Exhibition will be on display until Feb. 6.