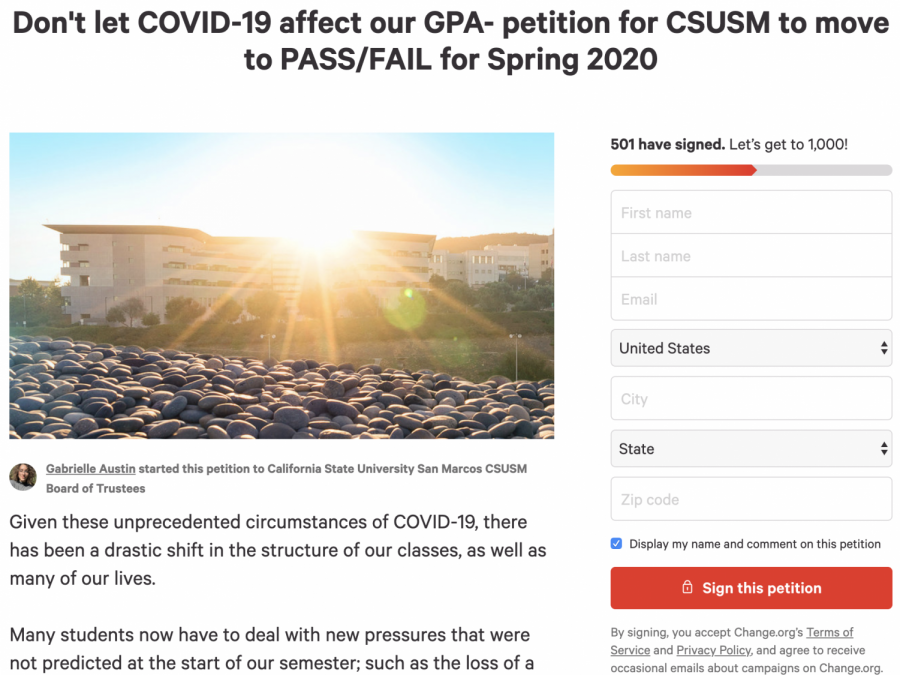 In this time of self-isolation, CSUSM students aren’t letting physical distancing get in the way of standing together to voice their support of a credit/no credit grading option.

Several petitions on Change.org advocate for the grading shift. Chelsea Betancourt, JoAnna Mary Noel Brown and Tasha Kadah are among the 10-member group of students responsible for starting the largest such petition.

Titled “Don’t let COVID-19 affect our GPA – Petition for CSUSM to move to PASS/FAIL for Spring 2020,” the petition has amassed 501 signatures as of the publishing of this article.

“If anybody was in opposition of that position, they saw how important it is to about 400, almost 500 people…the petition only confirmed that the student body wanted this,” said Kadah, a third year communication and pre-law major.

Nine group members are from Dr. Fredi Avalos’ class COMM 456 – Leadership and Social Change. The tenth is Kadah, who is taking an independent study with Dr. Avalos.

While the group’s project is under the guidelines of COMM 456, project ideas for the class are student-driven.

“It’s 100 percent student’s ideas of what they’re going to do to be leaders in the community. The ideology is, how do you change the world? You take something that’s dear to your heart, and you fight for it. And that’s what we’re doing,” said Kadah.

While the group’s original focus was bringing awareness to mental health resources on campus, the pandemic prompted them to tweak their project.

“Mental health was the main issue…but when the pandemic happened, we made the executive decision, and it was a group effort, to change it towards mental health during this negative time,” said Brown, a senior communication major.

They were inspired by discovering that UC Berkeley had changed to a pass/fail model. “We said, you know what, we deserve that as well,” said Betancourt, a senior communication major.

Betancourt, Brown and Kadah have all experienced challenges in adjusting to online schooling.

“I have ADHD, I have to be either in the library for hours on end or I have to be in a coffeeshop in the corner with classical music just focused on my homework, but at home I have more duties,” said Brown, who now works more hours at her ambulance dispatcher job.

Kadah said she was concerned about maintaining her grades while campus was shut down. She also pointed out that many students lack the technology needed to be successful in online classes.

As for Betancourt, she said that professors haven’t always been understanding of her struggles. “It’s been difficult and I’ve tried expressing it to my professors that ‘Hey, I’m having some trouble with this,’ and sometimes it’s a ‘Well, you still have to do it or you’re going to have to lose the points’ scenario,” she said.

They shared their petition through social media and by texting classmates, who then continued to spread the word.

“It’s something that can only help you, cannot hinder you kind of scenario,” added Betancourt.

Senior social science major Jen Okada is the creator of a similar petition which has about 200 signatures. She said that she finds online classes very challenging.

“Now that things have switched, I’m struggling. So I was like, ‘OK, I can’t be the only one feeling this way,’” said Okada.

“This is a tumultuous time for thousands of people, and trying to focus on school and keeping high grades up and adjusting to a new normal, basically, was starting to become too much to handle,” said Okada.

Okada said her mental health struggles are making it difficult for her to succeed in online classes. “Trying to motivate myself to participate in online courses while the world is in chaos is challenging and creating a lot more stress,” she said.

Okada also pointed out that some students are parents and some may suffer from domestic violence, which would complicate at-home learning. “With libraries and coffee shops being shut down…there is no escape or peace for them. People are hurting out there,” she said.

The ultimate goal of Betancourt, Brown, Kadah and Okada was to be a voice for students. “We definitely want to have the students heard, and that’s what we’re advocating for,” said Betancourt.

Kadah said making a difference requires persistence and making allies. “Don’t shut up…Once you take action, people listen, and if you get a bunch of people behind you, you can change anything,” she said.