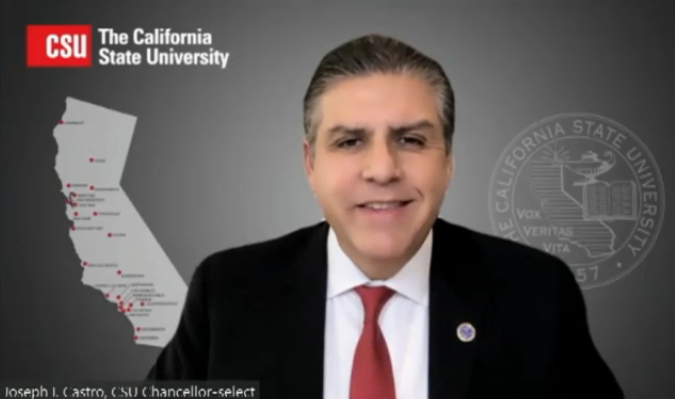 Chancellor-select Joseph I. Castro will take office on Jan. 4, 2021.

CSU Chancellor-select Joseph I. Castro introduced himself to his constituents and spoke about what he hopes to attain as chancellor during a live broadcast on Sept. 25.

“I am so thrilled to be Chancellor-select for the CSU. It’s an amazing leadership opportunity, a chance to make a positive difference for our very talented students and to support our very talented faculty and staff,” said Castro.

During his tenure, Castro hopes to increase system-wide graduation rates, gain a secure funding base and inspire elected officials to prioritize investment in the CSU.

Additionally, Castro would like to see continued innovation, a diversifying of faculty and students in the system and an ongoing dedication to serving students.

The grandson of Mexican immigrant farm workers, Castro grew up in the small town of Hanford in the San Joaquin Valley. After high school, he attended UC Berkeley, aided by a program that the university’s chancellor Ira Michael Heyman had designed to raise enrollment numbers among students from the San Joaquin Valley.

“It really is an example of leadership mattering,” said Castro about Heyman’s program. “Making that decision [to attend UC Berkeley] changed my whole life.”

Castro completed a bachelor’s degree in political science and then earned a master’s degree in public policy, also from UC Berkeley. Recognizing that he had a passion for higher education, he went on to receive a doctorate in higher education policy and leadership from Stanford University.

“It became clear to me that universities are one of those institutions in society that transform lives. It was transforming mine, and that’s what really triggered my own interest in working in universities,” said Castro.

Castro has served in a variety of faculty and administration positions, most recently as the president of CSU Fresno since 2013.

Castro emphasized that one of his top priorities as chancellor will be the Graduation Initiative 2025 (GI 2025), a plan that the CSU implemented in 2015 to raise graduation rates and eliminate equity gaps in degree completion.

“I am firmly committed to the GI 2025 goals. I know all the [CSU] presidents are, and the campus communities are behind these as well. So we are going to stay focused on that … it’s just so vitally important,” said Castro.

Castro hopes to foster personal relationships with elected officials and to encourage them to support the CSU. He was encouraged by his recent virtual meeting with Governor Gavin Newsom.

“It was a conversation about the success of our students, about COVID and how faculty and staff are navigating that … we had a very productive conversation, and [Newsom] committed his continued support to the CSU,” said Castro.

Castro acknowledged that the current virtual modality is a challenge but remains hopeful for the future. “I just see incredible potential for us in the coming years. And it will be difficult in the short term, certainly, but I think that we will persevere through that, and we’ll be much stronger after having gone through this experience,” he said.

Castro praised his predecessor, Timothy P. White, for his success as chancellor over the last seven years. “I want to express my gratitude to Chancellor White, who’s done a magnificent job, and I want to credit him for where we’re at today. We’ve got a much more powerful, effective CSU than we did when he started, and that’s my desire, is to build from that, with our CSU team,” he said.

“If we’re all going to stay rowing in the same direction, talk about a powerful force. There’s nothing like it in the country … I’m hopeful that I can inspire the very best in everybody so that we can go down that path and elevate the CSU to new heights of greatness,” said Castro.

To watch a recording of the broadcast, visit youtube.com/watch?v=n2Y9XRtW03g.