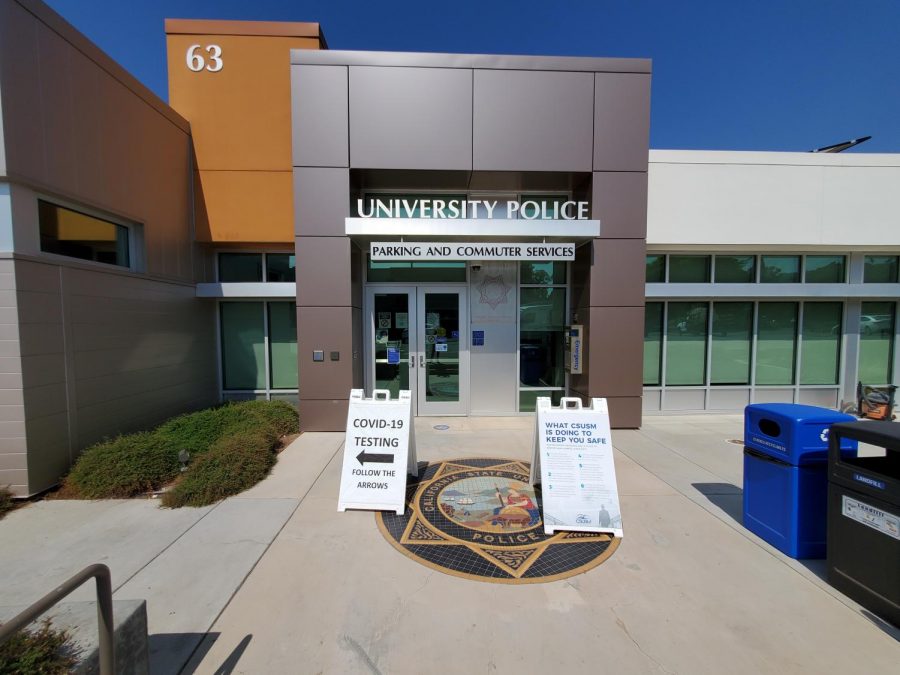 This story was updated on Oct. 13 with an explanation of  what SQE is and links to their website.
Students for Quality Education (SQE) voiced their demands for CSU campuses to defund UPD on Oct. 1.

SQE is a a statewide student organization with chapters on 22 out of 23 CSU campuses that advocates for a high quality, equitable CSU education. Their plan would reallocate funding towards student and faculty resources and would replace the basic duties of campus police officers with community-based programs.

SQE proposes setting up a student and faculty run program for the emergency blue lights located around campus. SQE also calls for a committee to oversee where money and resources go as they are reallocated and for removing funding for firearms on campus.

“I have not seen the specific demands so I can’t comment on that. We need to have public safety officers in order to protect our facilities and the people that are here,” Castro told The Cougar Chronicle in a press conference.

“Some campuses are not occupied by large numbers of people [amidst COVID-19] but that can also be a time where others who might want to do bad things can take advantage of that opportunity. I do believe we need to fund our public safety officers,” Castro said.

Chantung told The Cougar Chronicle in an email that CSUSM will not disband UPD but is looking into its policing.

“… [UPD] serve[s] the university with a community-policing model and commitment to maintaining a safe environment for students, staff and faculty,” wrote Chantung.

“CSUSM recognizes that some may be uncomfortable with police while others, in light of school shootings and other campus crimes nationally, feel more secure. While not everyone may agree, the university police department strives to understand the needs of our diverse community and holds officers to the highest standards,” wrote Chantung.

In August, CSUSM implemented a UPD Community Engagement group and a Task Force on Innovative Policing and is taking steps towards creating a Psychiatric Emergency Response Team.

Five student organizations accused UPD of malpractice for an alleged misuse of force on a student in 2019. According to the organizations’ allegations, the student was forcibly removed from campus, labeled as a 5150 or “danger to themselves or others,” taken to the hospital and released shortly after with a $13,296 bill.

However, the university disputed this version of events, saying, “The referenced incident involved a student who was visibly bleeding during class from an off-campus injury and the efforts of UPD officers, campus employees and paramedics to get him transported to the hospital as soon as possible so he could be medically assessed and treated.”

Faith Garcia, an intern with the SQE CSUSM chapter and a senior political science major and women’s studies and sociology minor, said that a campus without UPD would allow resources and mutual aid to be handled by stakeholders of CSUs, students and faculty.

“While a sergeant on our campus makes $5,688 minimum monthly, 33.2 percent of CSUSM students are food insecure,” said Garcia. “Defunding UPD means we can reinvest in basic human resources for our faculty and students of color.”

“To the students who will need someone to take them to their car because they parked in the Z lot, or from the parking structure to the dorm because they are afraid, we do not need police for this,” said Garcia.

Timothy O’Connor, a fifth year business administration major with an emphasis in marketing, disagrees with SQE’s demand to defund and disarm UPD.

“Removing UPD firearms would leave the university completely vulnerable to an active shooter situation. The only way to stop a bad guy with a gun is to have a good guy with a gun nearby,” O’Connor said.

“I have not had any bad experiences. UPD has helped me once when someone did a hit and run on my truck in the university parking lot. I have not heard about any incidents of misuse of force by university police. Police officers are highly trained on when to use and not use force,” O’Connor said.

Although SQE’s goal is to abolish policing completely, Garcia pointed out that if students feel unsafe without UPD, for example because of school shooters, the San Marcos Police Station is within three miles of CSUSM.

“When someone’s first response to defunding UPD is a school shooter, a different discussion needs to happen about how white supremacy is active and remains a threat on our campuses. We should be asking how we can make our campus safe from white supremacy without militarization of police, and reallocate safety measures without police,” said Garcia.

SQE also demands hiring more mental health counselors to meet the American Psychological Association’s recommended ratio of one counselor for every 1,000 to 1,500 students.

“On our campus we only have a handful of counselors for 17,000 students, making it harder for students to access. With the extra money we would get from defunding the police, we’d be able to make these things possible,” said Garcia.

SQE praises programs such as Transitions Collective and Project Rebound, student organizations that support formerly incarcerated students, but says CSUSM is still supporting systems that harm students affected by the prison industrial complex, such as UPD and Sodexo.

Sodexo is a company that manages CSUSM Dining Services that has been linked to workplace violations and profiting from private prisons.

“Abolition doesn’t mean reform or new forms of policing. It is about building up life-giving institutions that ensure the safety of people on campus and reducing any institutions of slavery that have continued, including the school-to-prison pipeline. Abolition is about acknowledging that safety doesn’t come from over-militarization of police or locking up people in cages, but addressing the root of the causes of violence and harm, which police are,” Garcia said.