The Cougar Chronicle • May 3, 2021 • https://csusmchronicle.com/21935/a-e/review-barb-and-star-go-to-vista-del-mar-shows-that-middle-aged-women-can-still-have-their-hot-girl-summer/

REVIEW: Barb and Star Go to Vista Del Mar shows that middle-aged women can still have their “hot girl summer” 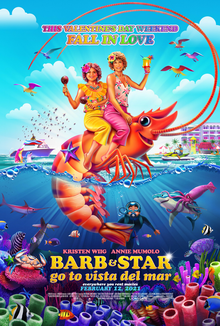 Photo from Wikipedia, property of Lionsgate film or the poster’s graphic artist

Barb and Star go to Vista Del Mar is an eccentric and poppy new film that amplifies vacation vibes on the sunny coast of Florida.

As we head into spring and summer months, this film livens the mood for coming holidays and is perfect to watch with family and friends. This film is a physical representation of what it would be like if middle-aged women had their own “hot girl summer.”

Starring Kristen Wiig, Annie Mumolo and Jamie Dornan, the three provide a mix of distinct performances that will lure viewers into the film.

Barb and Star are inseparable best friends in their 40s, who have just been let go from their bland day jobs. In a sudden sign of fate, they believe it is time to try something different from their simple Nebraskan life and go on a vacation. While the two protagonists are enjoying their time in a new setting, a nefarious plan is also being hatched by another set of characters.

The main antagonist named Sharon is the complete opposite of both Barb and Star. The quirky duo is charming with their awkward humor and thick midwestern accent, while Sharon displays bitterness and resentment.

Another important character, named Edgar, is a daring hunk who may or may not be a potential love interest to Star.  It creates an interesting dynamic between the diverse range of characters.

Throughout their journey, Barb and Star encounter odd people and strange situations that flip their idea of a vacation into something grander.

This film is visually captivating through its bright color palette, rhythmic pacing and dream-like set designs. To add to the fruit-punch aesthetic, this film also has its range of musical numbers that are cheesy yet enjoyable to listen to.

Not everyone will find this film’s comedic style appealing, but those willing to give it a chance will recognize how unique the story and characters are. There is never a dull moment in this film and every scene will either have viewers smiling or downright laughing.

Barb and Star redefine the meaning of a lifelong friendship and, inseparable as they may be, the two are quite singular in their desires and needs. Though they have reached their 40s, they still find the time to be free and carry a consistent youthful shimmer.

You can find new love, adventure and reconciliation at any age of your life. Grab yourself a nice cool drink and wear your culottes as you dive into this grand new adventure.

Angelica Cervantes is a recent transfer to CSUSM and is now a staff writer for The Cougar Chronicle. She enjoys writing her own stories as well as watching various types of films. She aspires to become a screenwriter and to have an influence in cinema.