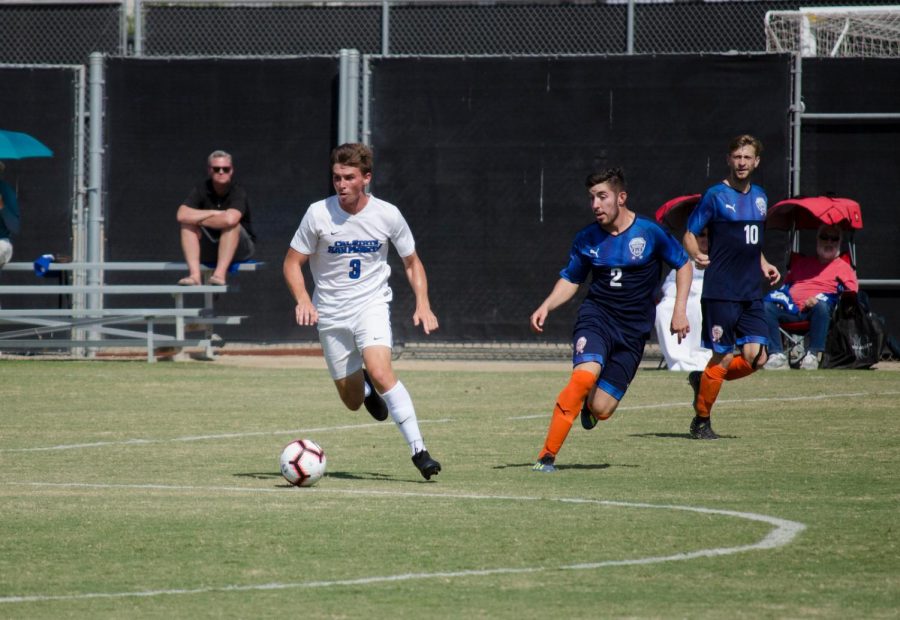 Corbin Thaete (#3) feels good to be back on the field playing soccer for CSUSM following the pandemic.

What is something that makes playing for the CSUSM soccer team a unique experience?

It comes down to two things, I think it’s our athletic administration so everybody, our athletic directors, our sports information directors, they all do a great job with student athletes as far as communicating with us. Being involved in what we’re doing in school and athletically.

The second thing is our coaching staff. I think you look across the board at all of our coaches, not just our coach in general but I see this in every coach.They care about every one of their athletes more than just a player for their team. It’s a lot of developing them off the fields, off the track, to make them a better person for the rest of their life.

And I think that, you look at athletes who have graduated, guys or girls that have gone on already and they’re doing huge things and it’s because they were developed by such great coaches and taught so many great things while they were playing here.

How does it feel to play the season after an extended break due to COVID?

I feel super good. For like 18 months we were all trying to find something to do. I went back to going to the park with my mom to kick the ball around but now we have access to everything that we took for granted and it’s awesome.

It’s just being able to see everybody in the training room walking around the cornfield house, walking to and from games, and it’s so much fun to play too. I mean don’t get me wrong, like, that’s what we all came here to do and what we all focus on every day but, it’s also the small things that sometimes you take for granted and you don’t realize how fun or how interactive it is until you actually have to miss it for a year and a half.

How has the team dynamic changed after coming back from break?

It brought us closer together. I think throughout this we kind of never got to really see each other. So now, we all are. Even when we’re not on the field, we’re hanging out a lot, just trying to make the most of our time and make the most of what we can do. And then on the field we’re well suited because we know each other so much better.

How would you describe your first game since COVID?

The first game felt good. You could tell that we were a little lacking. The game taught us a lot of stuff and what we need to work on going forward. I guess, coming back from COVID.

In general, it was just a really great experience being on the field again and we had a huge crowd and a lot of athletes showed up for us and we really appreciate that from everybody. It was a big, big moment kind of coming back and doing that, as it was the first time I played in front of my parents in two years, and some of my friends so it was nice.

What advice would you give to prospective CSUSM athletes?

It’s been tough for everybody but it’s something that our coach tells us all the time, “it’s just the process,” and that can mean a lot of different things too. But for us it’s just control what you can control. If you’re looking to be a prospect, you have to do everything you can to get your foot in the door. Get seen by somebody. So, whether it’s sending out emails all the time or trying to talk to a coach. Come out to some games, just get your foot in the door, and control what you can control.

Catch Corbin and the Men’s Soccer team in action at their next home game Sept. 18 against Cal State San Bernardino at “The Cage” or via livestream through the CCAA Network.