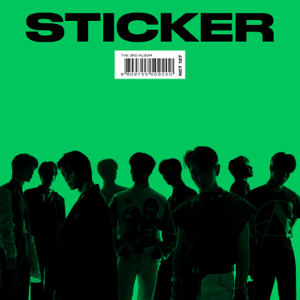 STICKER is the third studio album from Korean subunit NCT 127.

NCT 127, a Korean subunit belonging to global themed boy group NCT, released their long-awaited third full-length album STICKER on Sept. 17. The album consists of 11 tracks, including title track “Sticker,” which features songwriting by members Taeyong and Mark. The album itself is experimental, each track differs from the former, ranging in genre from a unique EDM based banger to a vocal focused ballad. In addition to the auditory experience, NCT 127 has prepared multiple visual performance videos and teaser track videos to accompany the album. STICKER is out now and available to stream on all major music platforms.

TikTok stars Dixie and Charli D’Amelio now have their own reality show on Hulu. While the siblings seem like typical social media influencers, the show explores their lives on a deeper level. A very prevalent theme of the show is the negative effects of fame on a person’s mental health. This show does a great job of humanizing the D’Amelio sisters  by showing audiences what they go through on a day-to-day basis being some of the top creators on social media, also providing an important message on the power of  social media.

“Life is Strange: True Colors,” the third installment in the popular “Life is Strange” series, was released Sept. 10. Play as Alex Chen, a 21-year-old girl turned detective as she investigates the sudden and mysterious death of her older brother, Gabe. Although she considers it to be a curse, Alex must make use of her supernatural ability to see, feel, and manipulate the emotions of others. Your in-game choices will determine which ending you’ll play, so choose carefully. “Life is Strange: True Colors” is currently available to play on Playstation 4 and 5, Xbox One, Xbox Series X/S and PC. A Nintendo Switch release is scheduled for Winter 2021.

Don’t Breathe 2  speaks upon the paternal bond between an adopted child and a  surrogate parent. We see from all characters in this film very deep rooted aspects of our society as a whole.  Allowing the story to resonate with all who see it in  a variety of ways from the protective parent to the vulnerable, yet determined adolescent.  Once this film puts its foot on the gas there’s no stopping, you must see it through. Don’t Breathe 2 does take a turn from its original story, but it is both inviting and intriguing.