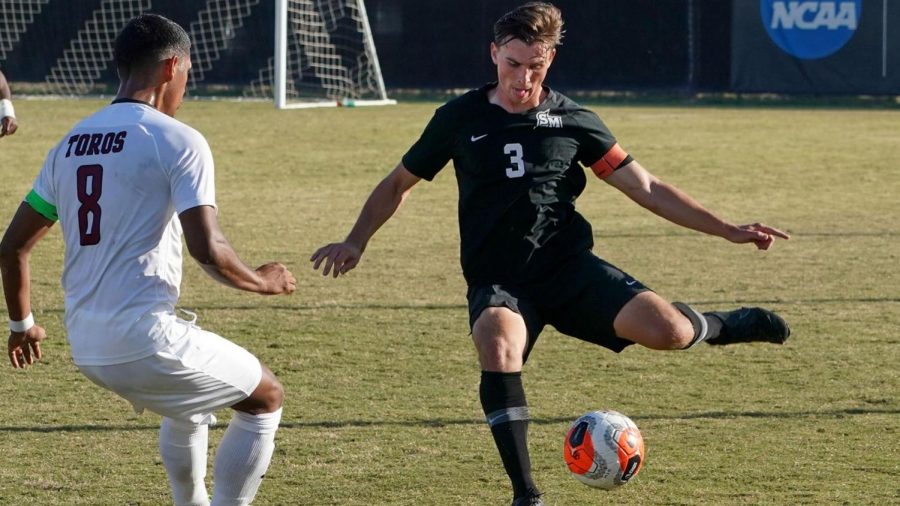 Men’s soccer suffered a gruesome loss against CSUSB, marking the end of their season.

The loss means the Cougars failed to compete in the 2021 NCAA Division II Men’s Soccer Tournament (College Cup). To win over their opponent, they can only prepare for the next College Cup in 2022 since they cannot have playoffs.

CSUSB’s Gerardo Flores scored the first goal in the 25th minute, assisted by Francisco Sierra. Sierra, a Cal State San Bernardino soccer player, made a fast cross pass to Flores from the right side of the goal and Flores kicked a powerful shot to the CSUSM goalkeeper, which compelled the goaltender to deflect it into his own goal. CSUSB got a 1-0 lead.

The Cougars  conducted several counterattacks to salvage a draw, in the meantime, they saved a ball in the 19th minute when the CSUSB players tried to cut through a path so gave the ball to the winger Sierra near the front line of the goal from the middle of the field.

Yet, San Berardino’s Francisco Gomez got a second goal for his team in the 9th minute. Coby Atkinson gave the ball to Gomez at the end of the line from the left side near the goalie, and Gomez bundled the ball to the right corner of the goal, allowing CSUSB to widen their lead against CSUSM.

With time running out for Cal State San Marcos, the referee whistled for a foul in the 67th minute when a CSUSM defender knocked down a CSUSB player Ed Rodriguez in the penalty area. But, Kevin Aguilar received the penalty kick for Rodriguez. Aguilar tricked the goalkeeper by moving his body to the right while delivering the ball to the lower-left corner of the goal.

In the second half, CSM’s players did well from the start to the end, playing the give-and-go tactic in long and short ranges, attacking their opponent by threatening Cal State San Berardino’s goalkeeper several times and deflecting many balls from them in the goal box. Overall, the Cougars made their best effort to win the game during the second half.

In the 68th minute, Rigo Aguilar poke tackled a CSUSM defender near the left front of the penalty area and made a chip shot to the goal, and the goalie leaped high and tried to deflect it over the goal and collapsed on the ground.

In the remaining ten minutes, Pedro Arellano and Omari Mark knocked a ball from a Cal State San Marcos defender and passed it to Tannor Knorr by using a wall pass to trick the goaltender and get a 5-0 lead.