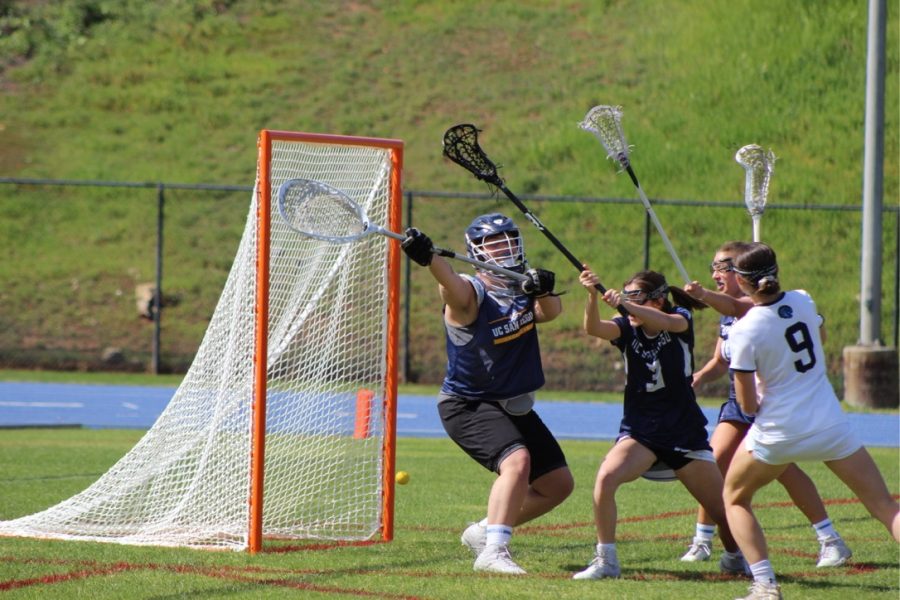 Starting the beginning of February, the Women’s Club Lacrosse team at Cal State University San Marcos lead their season undefeated until their recent defeat against UCSD, their biggest rivals. Their winning streak of seven came to an end on Sunday, March 6th, at the Mangrum Track and Field with a final score of 11-12.

However; despite their recent loss, it is in high hopes that CSUSM can make it to Nationals in their spring 2022 season. The team is in Division II under the Western Women’s Lacrosse League, ranking 5th place nationally.

Under the leadership of their President, Jillian Dohrmann, and their Coach, Meredith Ramos, the team lies in good hands. Fourth year midfielder, Dohrmann, says that “we are hoping to win playoffs to make it to nationals and I feel like with this team, and our intensity, we are going to make it there”.

The game against UCSD was neck in neck through all four quarters, proving the intensity claimed by Dorhrmann. The Cougars started their game with a three point lead, two goals achieved by Dohrmann and the third shot by second year, Kali Price.

With seven minutes left in the first 15 minute quarter, the Tritons scored their first goal by #22, Kayla. By the second quarter, Cougars held a lead of 4-2 thanks to an assist to goal by CSUSM’s #6 Emily Boles.

In the first minute of second quarter, UCSD made a break to goal, shooting the score to 4-3, just a one point difference with the Cougars still in the lead. Price at it again with her second goal of the game, brought the score up 5-3.

Catching up, the Triton’s brought the board to a tie of 5-5. UCSD attempted a shot on goal, but goalie, Megan Schneider, saved the ball and cleared it to third year defender, Camryn Guiao. Running past the restraining line, Guiao settled the ball on the attacking side where possession stayed until third quarter.

First draw of third quarter, #9 Dohrmann, gained possession and assisted to Boles, making it another point on the scoreboard for the Cougars. Making a comeback, UCSD’s #16 brought the score to an even 6-6 with 11 minutes on the clock and just a minute later another goal was scored for the Tritons by a turnover from the Cougars.

Back at a tie, 10-10, CSUSM’s second year, Alexi Schrems, brought the Cougars to 11-10 with a penalty shot on goal. Tied once more with two minutes on the clock, the Tritons took a lead of 12-11, holding the ball till the final buzzer.

Even though their streak ended, the Cougar’s have a lot more wins in them. Dohromann says that “keeping high intensity, keeping each other accountable, and making sure that everyone is responsible and uplifting” is the reason why the team has been so successful.

Defensive player #23, Camryn Guiao, says “the outcome of this UCSD game was not what we wanted, but both teams put up a great fight. We were on our toes the entire game and this team was one of the hardest to play”

Before leaving the field, Guiao stated that she was “proud of what our team had done today, but now we know what we need to work on for the rest of the season”. As the Cougars departed ways, the crowd followed, stunned by the outcome, but proud of the team.

Cal State San Marcos and UC San Diego played an outstanding game of the week for the Western Women’s Lacrosse League. With only a one point difference between UCSD ranking #2 nationally, and CSUSM ranking #5, there is so much more excitement for the rest of the season.