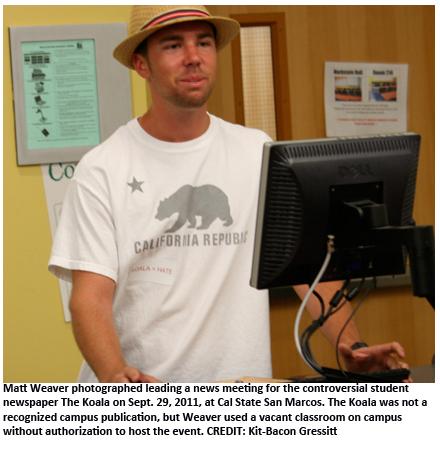 According to an FBI report – which was unsealed Friday after Weaver was charged and released on $20,000 bail pending trial – Weaver is believed to have used fraudulent means to swing votes in his favor to win the office of ASI president in March of last year.

Weaver, a Huntington Beach resident, was charged with access device fraud, unauthorized access of a computer, and two counts of wire fraud, according to the case report. No trial date has been set.

Weaver’s alleged goal, according to the report, was to secure the $8,000-a-year stipend paid to the ASI president, as well as oversight of ASI’s $300,000 budget. Federal investigators say a PowerPoint presentation found on Weaver’s laptop at the time of his arrest describes a plan to have four of his fellow fraternity brothers at Tau Kappa Epsilon (banned from campus several years ago for drinking and other violations) run as a slate for other open ASI vice president posts (each paying $7,000).

According to the report, Weaver is alleged to have attached at least 15 keylogging devices to 19 university computers about two months before the election to gather fellow students’ user names and passwords. Weaver allegedly intended to use the information to cast votes in his favor for the ASI elections. At the time of his arrest, the report says Weaver had a spreadsheet in his possession (colorfully titled “Fu** ASI Alpha”) with the username and passwords for 740 students and faculty.

The vote-tampering was detected on March 15 (the final day of elections) by employees of university’s technology department, IITS, who noticed hundreds of votes coming from the same IP address in Academic Hall. According to the report, IITS staffers remotely accessed the computer to watch Weaver’s onscreen activity. Another officer onsite used a cell phone video camera to capture 20 minutes of film in which Weaver allegedly can be seen cutting and pasting usernames and passwords from his spreadsheet into the campus voting system, the report says.

“The university now has methods and policies in place to detect keyloggers,” said Margaret Lutz Chantung of the communications office on Friday.

Lutz Chantung also confirmed that the student’s information that was compromised in the election fraud last year has been restored and secured.

The university has no comment on the case, but has confirmed that Spring 2012 was Weaver’s last semester as a student at CSUSM. Weaver was a junior at the time of his arrest. He was also an editor for The Koala, a controversial independent student newspaper that was known for its misogynistic and racist content.

Weaver denied his involvement with The Koala, but he was photographed running a Koala news meeting in 2011 and his involvement as an editor was confirmed to The Cougar Chronicle by a fellow staff member last spring.

At the time of last year’s election, running as a slate was not allowed under ASI rules. The ASI rules committee recently changed the election rules to allow candidates to run on a slate, the effects of which will be seen in this year’s ASI election in March.